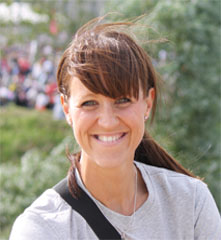 Gemma began Finely Tuned Physiotherapy as a part time practice in 2007 before developing it into a full-time practice in February 2010, moving to the current premises in 2016. Her previous roles as a fitness instructor and personal trainer coupled with her competing at national/international level in heptathlon/triathlon have naturally led her to become a sports injury specialist. Having also competed in gymnastics, trampolining, netball, hockey and swimming she has a rounded knowledge of the requirements, discipline and demands involved in competitive sport. She has worked with several sports teams including football, rugby, gymnastics, pro body building, cycling, triathlon, swimming, athletics clubs and dance schools. She has worked with the men’s’ GB wheelchair basketball team, the Red Bull F1 racing team and UK athletics.

Gemma has received tutorage from the physiotherapist for the GB cycling team, regularly attends physiotherapy seminars at Tottenham Hotspur Football Club, is qualified to perform the Epley maneuver and other techniques for the treatment of vertigo and has recently completed advanced extracorporeal shockwave therapy training. Gemma has schooled with The Running School and is able to perform a comprehensive video gait analysis to identify potential causes of injury. In 2012 she competed in the European Championship Ironman Triathlon race in Frankfurt, Germany……..since then she has had 4 children including twins so occasionally manages to run to the end of the road and can pull out a distinctly average half marathon.